(Oliver Rauhut, in collaboration with Julia Desojo and Stephan Lautenschlager) 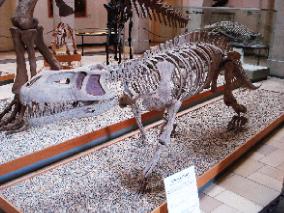 In the end 1920ies, German palaeontologist Friedrich Freiherr von Huene collected vertebrate remains from the Middle to Late Triassic Santa Maria Formation of Brazil. This material was later described by von Huene in a monograph published in 1942. On the basis of these remains, Huene established several new taxa, including the "pseudosuchians" Rauisuchus, Prestosuchus, Rhadinosuchus, and Hoplitosuchus. These were the first basal crurotarsans described from South America, and they are thus of considerable historical interest as reference taxa for further research in South American basal archosaur diversity and evolution. In the current project, which forms the Humboldt project of Julia Desojo, all this material is being revised to establish the taxonomy and diversity of basal crurotarsans from the Santa Maria Formation.

Project supported by the Humboldt-Foundation

An important Late Triassic vertebrate fauna was discovered in 1929 in a quarry close to the village of Ebrach, northern Bavaria. 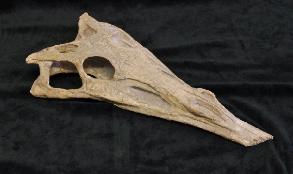 Numerous discoveries were made in this quarry in subsequent years, and were finally described by Munich palaeontologist Oskar Kuhn in a series of papers pubished in the 1930ies. Unfortunately, much of this material was subsequently destroyed during WW II.

Among the best and most important specimens from Ebrach that survived the war are the holotype specimens of the phytosaurs Francosuchus angustifrons and Ebrachosuchus neukami. The material comes from the Blasensandstein and is thus considerably older than the better known fauna from the Stubensandstein of Baden-Württemberg; indeed, these two taxa represent the oldest phytosaur taxa from the German Triassic and are thus of considerable interest for our understanding of the evolution of the group. In recent years, both of these species have been referred to the genus Paleorhinus. Given the importance of this material, we are currently working on a redescription and re-analysis of their taxonomic and systematic affinities.

Lautenschlager, S. and Rauhut, O.W.M. in press. A revision of Rauisuchus tiradentes (Archosauria: Rauisuchia) from the Late Triassic (Carnian) Santa Maria Formation of Brazil and its implications for rauisuchian phylogeny. Zoological Journal of the Linnean Society.