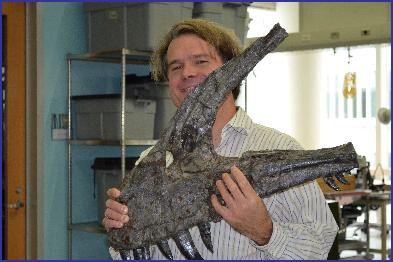 Having grown up in the city of Aachen, the westernmost and one of the oldest cities of Germany, I studied Geology and Palaeontology at the Free University of Berlin, already with the firm dedication to become a dinosaur palaeontologist. After finishing my diploma in Berlin, I moved to Bristol University for my PhD on the phylogeny and evolution of theropod dinosaurs.

During a two-year postdoc at the Museo Paleontológico Egidio Ferglio in Trelew, Argentina, I not only got the opportunity to learn Spanish and enjoy the excellent Argentinean wine and Asado, but also to get my hands dirty on the Jurassic outcrops of Chubut Province, where we discovered and excavated numerous new and exciting fossils from the Middle Jurassic Cañadón Asfalto and the Late Jurassic Cañadón Calcáreo Formations. Following another postdoc at the Museum für Naturkunde in Berlin, I finally got my current position as curator of lower vertebrates at the Bavarian State Collection for Palaeontology and Geology in Munich in 2004. Since 2007 I furthermore teach as adjunct professor at the Ludwig-Maximilians-University in Munich.